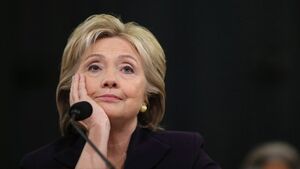 As First Lady of the United States, Clinton fought for gender equality and healthcare reform. Clinton was elected in 2000 as the first female senator from New York. She was re-elected to the Senate in 2006. Running for president in 2008, she won far more delegates than any previous female candidate but lost the Democratic nomination to Barack Obama.

Clinton launched a second bid for president in 2016. She received the most votes and primary delegates in the 2016 Democratic primaries, and formally accepted her party's nomination for President of the United States on July 28, 2016, with vice presidential running mate Senator Tim Kaine. She became the first female candidate to be nominated for president by a major U.S. political party. Despite winning a plurality of the national popular vote, Clinton lost the Electoral College and the presidency to her Republican rival Donald Trump.

Retrieved from "https://establishment.fandom.com/wiki/Hillary_Clinton?oldid=352"
Community content is available under CC-BY-SA unless otherwise noted.